After a journey of about 4.5 hours (from Munnar), we finally reached Kochi. The owner of the homestay that we had booked in Fort Kochi had informed us to book an Uber. As we zipped through the roads of Kochi we were surprised to see populous bridges and streets all through out the city. What we weren’t aware of was that it was the last day of Cochin Carnival (it was Jan 1st). It took us another 40 – 45 minutes to reach Fort Kochi which was jam-packed as the carnival was taking place nearby. After driving through the crowd at snail’s pace our driver finally gave up and asked us whether it was okay if he stopped the ride there as the destination was nearby. We didn’t want to prolong our journey either, so we got down, opened google maps and jostled through the crowd to our homestay.

We were greeted by the friendly owners – a Christian couple, who told us that if we freshened up and left for the beachside soon enough, we might be able to get a glimpse of the carnival. We freshened up and hurried out towards the beach, which was almost 1.5 kms away and our ‘feet’ were the only mode of transportation available due to the tremendously congested roads. We were too late anyway as it was already 9 PM when we reached what looked like the spot where the carnival had happened. We still weren’t sure of the actual spot as entire Fort Kochi was decorated for the annual event.

We decided to give up and grab some food as we were famished by then. And that’s when we realized what the best and worst thing about Fort Kochi was… there were too many cafes all around and we were tempted to try every single one, which put us in a dilemma. After a lot of debate we went to Fusion Bay. Now, since this is not a food review I won’t go in depth about the food at this place, but it is popular for fusion of different cuisines, as the name suggests, and the dishes are worth a shot.

As we strolled back to our homestay through streets bedecked with banners and colorful illustrations, we saw people from all walks of life. It made us sulk a tad bit that we had missed an event that had brought together such a humongous gathering of all ages, all religions and all classes of the society. 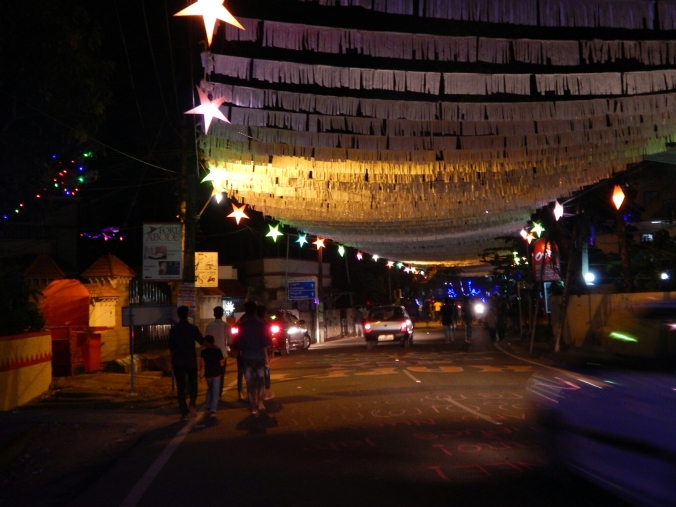 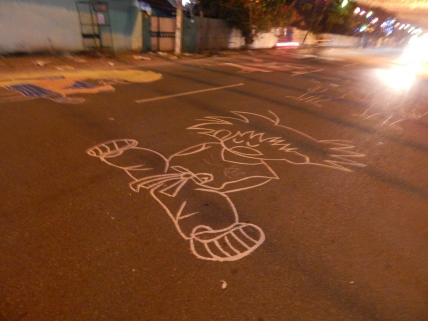 The next two days were spent loitering around the streets marveling at the beautiful houses with even more beautiful gardens and checking out antique shops. My two companions were almost ready to steal a few orchids as well. Thankfully, they did not get the opportunity. We also managed to cover few places of importance:

St Francis Church, the oldest church in India and a very significant structure from the colonial age, was once the burial place of Vasco Da Gama, until his remains were moved to Lisbon. His gravestone can be still seen here. 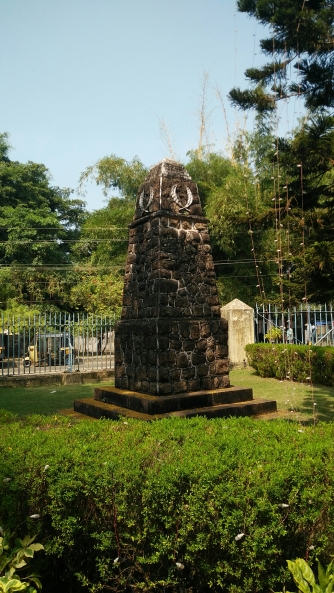 Santa Cruz Cathedral Basillica – Another important structure from the European colonial age, the architecture of this cathedral was inspired by Gothic style. It is said to be one of the finest churches in India.

Chinese Nets – I wish the beach was given more attention; we could see litter all over the place. 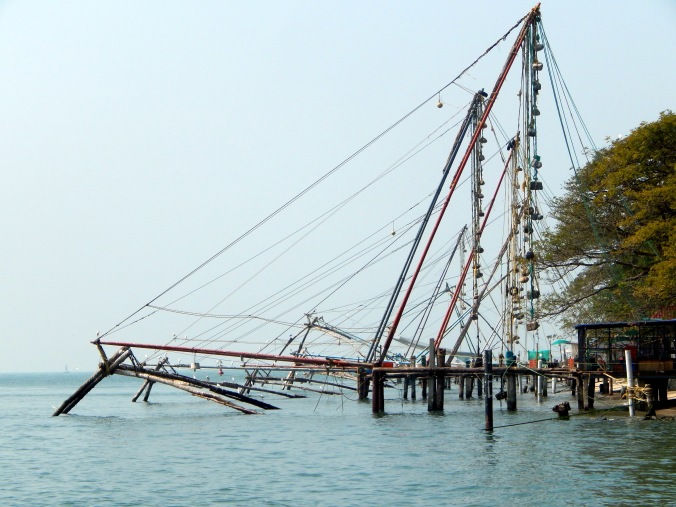 Dutch Palace – Also called Mattancherry Palace, it resembles an old isolated bungalow from outside. Inside, it has a huge collection of Hindu murals, exhibits and portraits of the rulers of the erstwhile Kingdom of Cochin. It has been declared a protected monument by Archaeological Survey of India

Jewish Synagogue – Also called Paradesi Synagogue, it is the house of prayer for jews and is open to visitors.

Jew town – Yet another lane with antique shops, but most of the items are expensive.  The buildings that house these shops are colonial, and have an old-world charm just like most places in Fort Kochi. 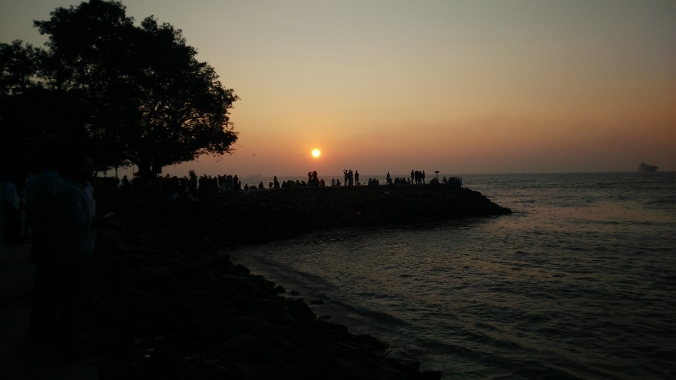 Kochi was everything we had expected it to be, and much more. After spending 1 and a half day in the misty hills of Munnar, all we wanted was some warmth, some sunlight and some breezy seaside weather. We definitely got it all, and in abundance! The weather was favorable – not extremely hot, but humid as all coastal areas are.

Initially when we had just entered Kochi, looking at the jammed roads I couldn’t help but wonder what exactly there was to see in Kochi other than a couple of beaches. But as we walked through the vibrant lanes of what were once colonies belonging to the Portuguese, the Dutch and then the British, I realized it wasn’t about visiting monuments or ticking off places on your checklist. The very feel of Kochi was laid back. You do not have to check out everything there is to see. Just list out a few places you do not want to miss and WALK! Trust me when I say this, walking in Fort Kochi is delightful, although you may need a cab to go to farther places like Mattancherry. And the timing couldn’t have been better for us, as we came to know that an Art festival called ‘Kochi Muziris Biennale‘ was going on. I guess, that was what I loved most about the place. There was art all around us – street art, art installations, paintings – mostly inside some selected cafes and buildings, and some at random places.

An antique shop in Jew town 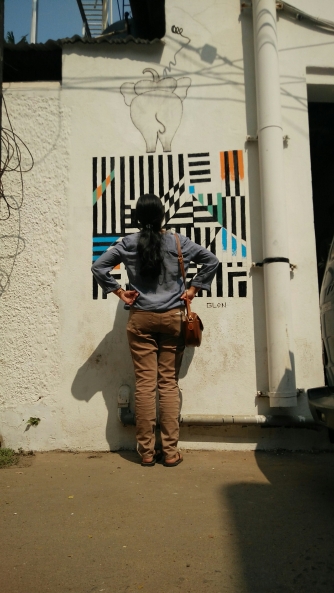 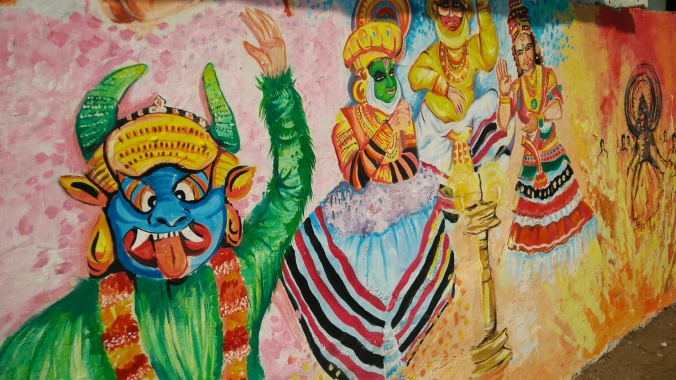 The other thing that amused me was the diversity I witnessed at this place. It was a very good example for the ‘India is a melting pot of diversity’ lessons we used to learn in school. You find churches, mandirs, and in the back ground you hear prayers being recited in a far off mosque, and just like that you spot an authentic Gujarati sweet shop and next to it – a board showing the distance to the Jain Temple! There was even a Jewish Synagogue!

And the food!! As said earlier there were many restaurants in the Fort Kochi area, leaving us spoilt for choice. The local Keralite and Catholic cuisines, characterized by strong coconut flavor are quite popular. However, owing to the large number of foreign tourists flocking the place, there are many Chinese, Tibetan and Continental restaurants as well. My two favorite places are Kashi Art Cafe and Loafer’s Corner Cafe (where I had forgotten my power-bank and had to come back all the way to collect it). Kashi Art Cafe is especially very aesthetic and artistic. There was this one other place that I heard a lot about and wanted to try, The Asian Kitchen, but time didn’t permit us. May be next time. Another place that needs to be mentioned is the Hotel Grand on MG Road in urban Kochi, where we had dinner the day we left Kochi, and also where I had to spend quite a lot of time on the phone trying to make a deal with a cab driver as I had forgotten my bag in the cab and he had driven off on another ride without noticing. My trips are never complete without me telling a sob story and how I learnt my lesson because of it. 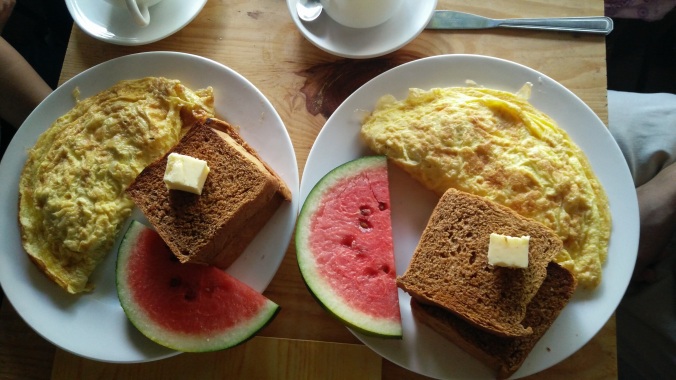 We had selected this hotel as it was reasonably near to our pick up point and we wouldn’t have to worry about missing our bus back to Bangalore. The staff were very courteous and place looked grand just like its name. We had authentic (heavenly!) Kerala food here and it was a good way to culminate an incredible trip. The place might have even been lucky for me, considering that the cab driver finally agreed to come back with my bag to the hotel’s entrance, I had to pay him of course. But, all’s well that ends well!